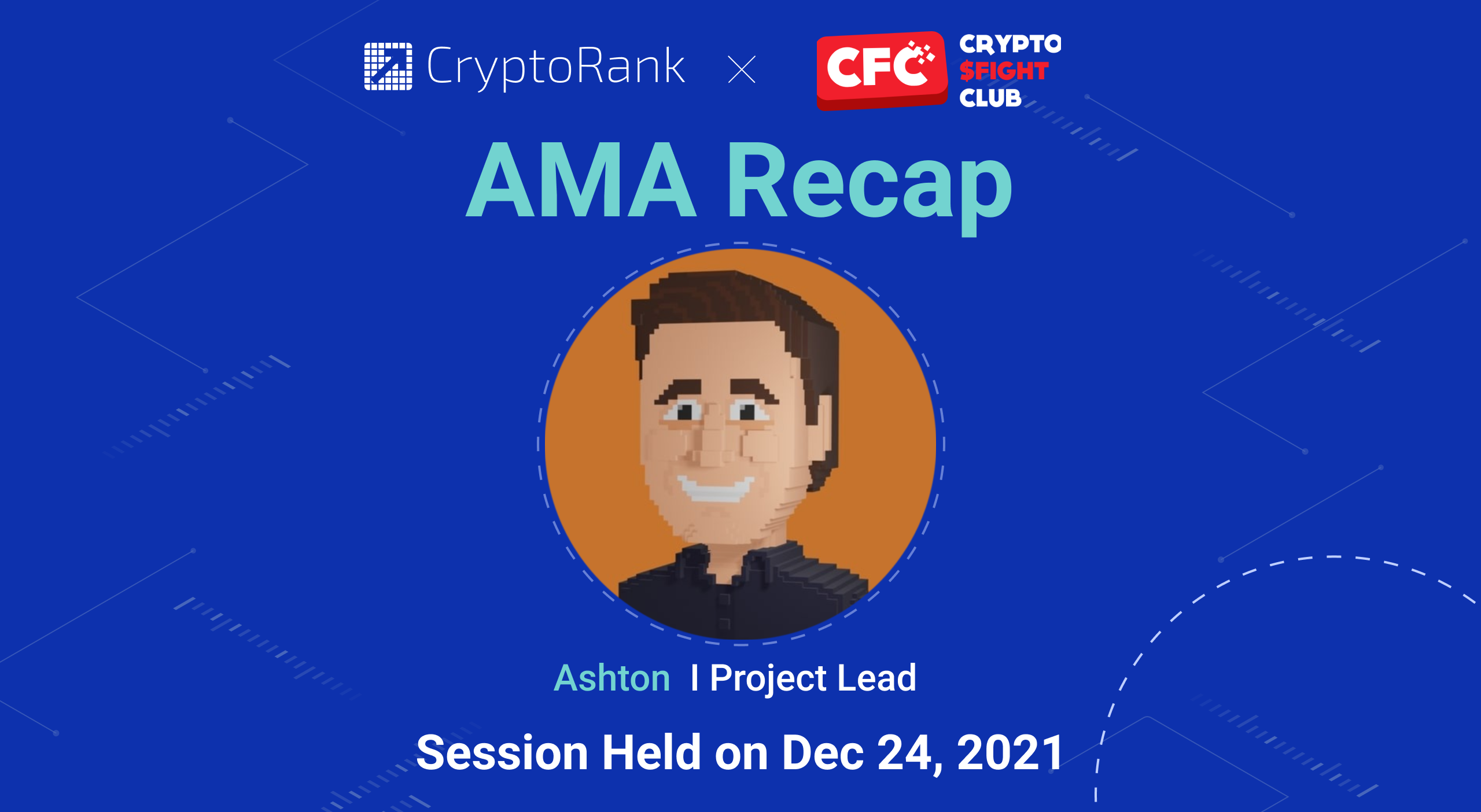 Crypto Fight Club (CFC) is a new and innovative NFT-enabled game that allows players to properly stake, battle opposing fighters, and even compete in championship events for real rewards.

On December 24, Ashton, Project Lead at Crypto Fight Club, joined us to answer our questions.

I dove headfirst into crypto in 2015 with Bitcoin ATMs and built out the largest ATM network in the world (at the time) at the end of my COO position in 2017.

#1. Can you tell us about Crypto Fight Club? What problems do you solve, both in the space and for the community?

Ashton: – Crypto Fight Club is all about taking existing ideas from current play2earn and staking models and enhancing them both, providing a product that has easy entry barriers and will make it fun and lucrative for everyone to get involved. It’s similar to games some of us played back in the day like the Final Fantasy series or Pokemon on the gameplay. Free roam and turn-based with a small storyline for each character.

Crypto Fight Club originally came about when we had a meeting with the current founder Cedric, also an owner at Elite Fight Club in Bangkok. He originally wanted to make some NFT art, similar to crypto punks but with famous fighters… Instead, Felix and I decided to gamify this ‘crypto punk’ idea and leverage a key partnership we have at our other company- GameStarter. As the fighting sport continues to grow because of names like the Paul brothers and Loomdart, the gap for adoption is becoming easier to fill with like-minded resources.

Regarding problems we’re solving- I’ll leave it at this one: transparency in the industry. The amount of exploits and bad actors in this space is unreal. Everyone who is subject to a mandatory lock-up and stores tokens to earn high APYs gives their tokens to a centralized counterparty (exchanges, staking farms, etc), or leaves their coins on any kind of hot wallet is subject to risk.

Crypto Fight Club has designed a fully-decentralized staking product (alongside a game, of course) where users can freely lock up their FIGHT and earn high APY by storing tokens inside of their NFT fighter. Everything stays in your wallet and you can choose the length of your stake and if you want to unstake at any time.

#2. Could you briefly describe the milestones Crypto Fight Club has achieved, and about your upcoming plans?

Ashton: – In terms of partnerships, we’ve signed a lot of world champion fighters in the sport of muay Thai to come on and help support the brand image. Some people are ONE Championship champions and others are muay Thai legends. Aside from the fighters, we’ve partnered up with 2 notable gyms in SE Asia: The Ring in Singapore and Elite Fight Club in Bangkok. We also partnered with the World Boxing Championship earlier this month for a big charity drive and got in contact with even more fighters and gyms.

Aside from the real-life part, we’ve completed our staking product and NFT 2.0s that are set to go live tomorrow, December 26th at 10 am UTC. This is the biggest milestone yet as these NFT fighters can be used to stake and also play the game modes when they come out.

Upcoming plans – mainly to drop the NFTs and staking product tomorrow and launch our first play2earn mini-game in January.

#1. When participating in Fight2Earn battles, the player who starts with small capital will face many disadvantages. So what is a reasonable strategy for players with small capital that can still make money without getting discouraged when playing the Crypto Fight Club game?

Ashton: – Having small capital does not put you at a disadvantage. For example, when you play the mini-games, everyone’s stats are the same. The first game, Chicken Run, is purely based on skill and is designed for the player to capture as many chickens as possible. Easy. For PvP, it is a matter of how well-skilled you are at the turn-based segment. Each player has the same deck of cards, differently placed, and will use a similar tactic used in chess. For those who have played Axie Infinity or Pokemon on the GameBoy, you know it’s all a matter of how you use your attacks and defense skills to survive and beat the s%&@ out of your opponent.

#2. As a gamer myself, I really find it very difficult to approach the current NFT game genres, because no matter how skilled or invested the gamer is, the person who deposits the most is still the winner. What strategy does Crypto Fight Club have to improve this situation?

Ashton: – Again, it’s not pay2win. Even when you’re minting an NFT – everyone has the same fixed amount of $FIGHT they need to burn to mint an NFT. To obtain one, the entry barriers are low and you can keep minting if you’re aiming to get a rare 1 of 5 fighters with the best stats. However, that won’t matter. If someone with a common card knows how to play the game well, better than someone with a high-end card, you can still lose. It will be hilarious watching how cocky people get with rare cards get rekt in the PvP ring. It does matter how skilled the player is at the end.

#3. What kind of partnerships with different projects/platforms/protocols can we expect from Crypto Fight Club in the future? Could you give us some examples of how other projects can leverage Crypto Fight Club?

Ashton: – The following partners are locked in:

Later on, after the product launch, our goal is to enhance our partnerships with other notable gyms and famous fighters as the sport continue to grow. All gym and fighter partners will be given free gear for their trainers and fighters as well as rebranding kits. For example, Elite Fight Club in Bangkok/Hua Hin Thailand is redesigning their entire gym to Elite Fight Club x Crypto Fight Club. It’s going to look sweet when it is done. For crypto companies like Gamestarter, you’ll be able to use GAME inside of the gaming ecosystem.

#1. Does your project support staking program? If yes. how is your stake system work, what is the requirement for users if they want to stake in your platform?

Ashton: – Absolutely. Our staking product is cool. You can lock tokens up inside of your NFT fighter that accrues over 100% APY based on the number of other people staking. At first, you will see large APYs like 10,000% + being a first mover. Staking will be divided by the number of active stakers and the 1% annual inflation (10,000,000) $FIGHT per year.

FIGHT staked is divided into 2 pools. Staking FIGHT natively will put you in a pool of 20% of the 1% inflation (2,000,000) paying out your APY from there. The remaining 80% of the inflation is paid out to those who stake the LP version of FIGHT by providing equal parts of liquidity and tokens on Pancake Swap. Once you provide liquidity on Pancake, you will receive an LP token which can be staked inside of your NFT fighter. NFTs and tokens stay inside your wallet, not a centralized counterparty.

#2. Are you afraid someday there will be another project with more innovative technology that can replace your project?

Ashton: – I would personally love that. I hope people take ideas and inspiration from Crypto Fight Club because we’re trying to bring the original sentiments and ideology of crypto back to the people and help them find decentralized and safer options. You can read more about our vision here: https://techbullion.com/crypto-fight-clubs-nft-2-0-staking-launch-will-shine-a-bright-light-on-the-true-ideology-of-crypto/.

#3. What do you mean by evolving your fighter via staking? How does it evolve? Is there a minimum amount you need to stake for this to happen and how long should you keep that staking?