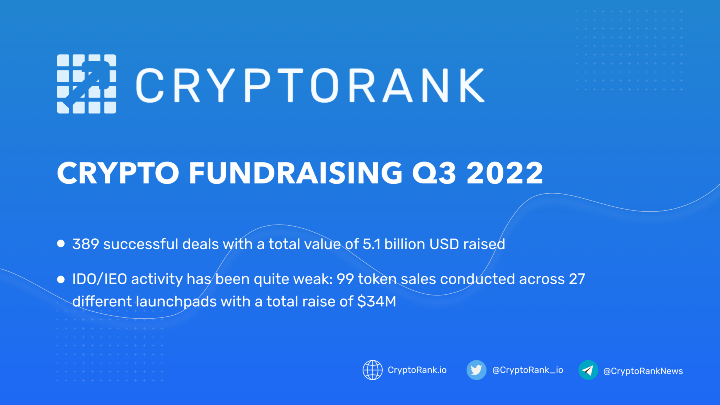 Crypto funding slowed dramatically in the third quarter of 2022 as investors shied away from later-stage funding bets.

Venture capital data thus far in the third quarter indicates that investment into blockchain-focused startups is on pace to contract dramatically compared to recent quarters and the heady 2021 period.

Amid the overall market decline, the amount of raised funds decreased by almost 3 times compared to Q2, it is the largest quarterly decline in VC funding over the past 2 years.

Web3 has been the dominating fundraising market category over Q3, accounting for 37% of total investments. This shows how venture capitalists are putting their weight behind the emerging technologies of GameFi and the Metaverse.

At the same time, capital interest in DeFi seems to be decreasing, with the sector accounting for only 11.5% of the total funding in Q3 2022. GameFi, on the other hand, as a sub-category has raised over $600M and Metaverse claimed $366M.

Noteworthy examples from the GameFi sector, despite the overall decline in funding, include the $250M rounds from Limit Break and Theorycraft. It is also worth noting that among the top funding rounds, Sui, Aptos and other L1 blockchains raised impressive amounts.

VCs are still focusing on early stage rounds. Pre-seed and seed rounds have raised a combined total of 1 billion USD.

Whereas, In late stages, like Series A, B, C, and D, — the number of successful projects and the total value of capital tends to decrease.

However, as the crypto market grows and more quality projects emerge, we will likely see a shift to more funding in post-seed rounds.

Coinbase Ventures and FTX Ventures have been the two most active funds during Q3, having participated in 23 and 19 rounds respectively.

In terms of the total of lead investments, Polychain Capital, a16z and Framework funds are at the top, both often-participating in large fundraising deals.

Such prominent VCs and fundraising projects will probably be the names we need to watch in the future. Their investment trends show that they can provide both capital resources and support during periods of market difficulty.

In spite of difficult market conditions, projects are continuing to raise funds via launchpads. However, for now IDO, ICO, and IEO fundings are at a records lows since beginning of 2021.

Among the IEO platforms, — Kucoin, FTX and ByBit are showing the best returns in terms of ROI.

With Seedify and Maiar leading the IDO platform rankings.

It is worth nothing twhat only two large projects that held an ICO on Coinlist had a token generation event, Agoric, a new Layer 1 blockchain, which began trading only after almost 9 months since the end of its ICO, showed a disappointing 14% ATH ROI at its most profitable, and now it is trading 0.5x, approximately a 50% loss. Axelar’s results were not much better with (1.17x ATH ROI and 0.68x Current ROI).

To keep up-to-date on crypto VC deals you can visit the funding rounds page on CryptoRank: https://cryptorank.io/funding-rounds