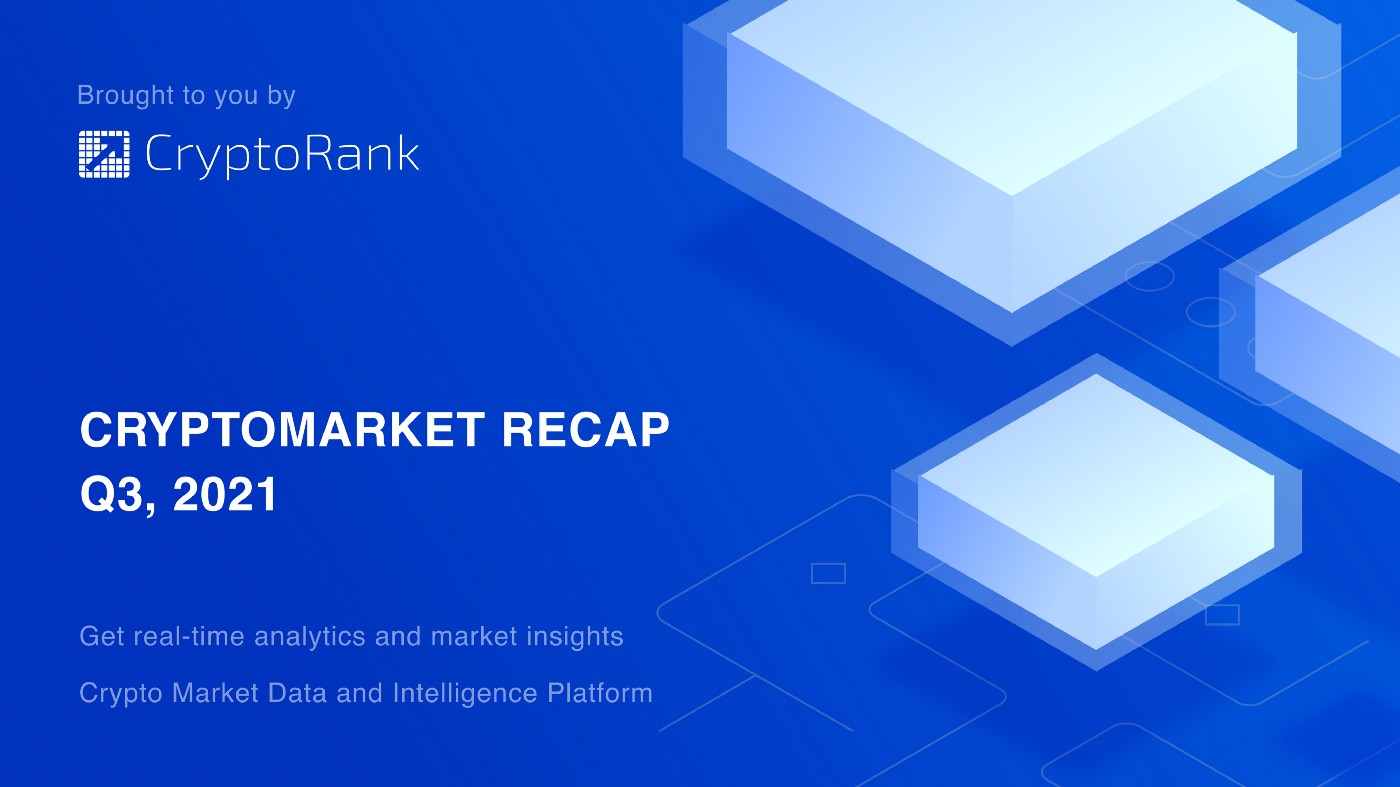 It was a bullish quarter for the cryptos. CryptoRank’s team has collected the most significant market updates and trends that are worth noting from Q3. Take a look into the latest market intelligence and in-depth reports about popular blockchains and digital assets.

After a 3-month long bearish market in Q2, the capitalization of the cryptocurrency market increased to its highest level of the year at $1.92T, which represents a growth of about 34.2% 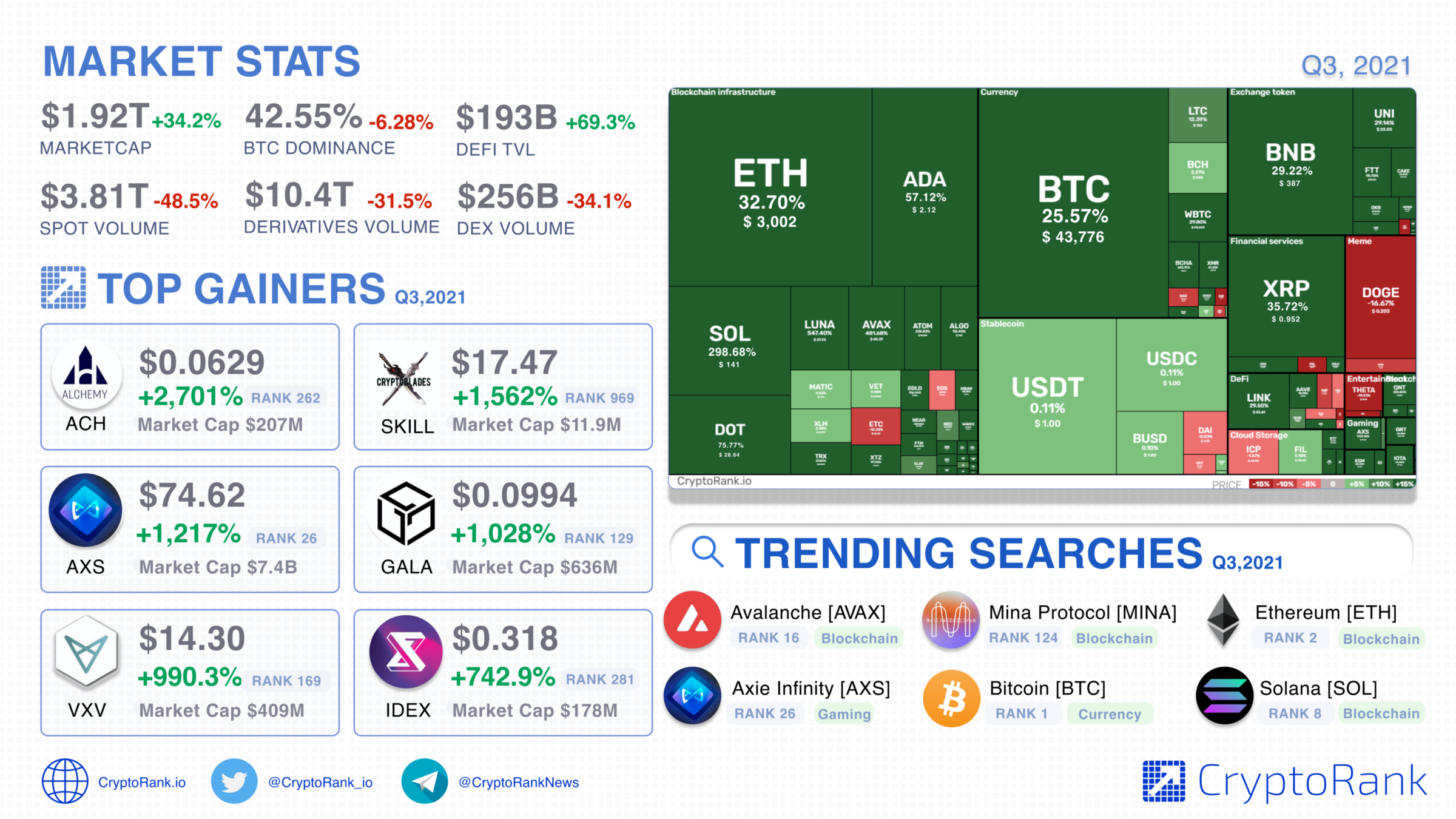 At the same time, the stablecoins market capitalization has surged past $125 billion and set a new ATH of $129.5 billion. The sharp growth in stablecoins suggests that crypto market participants are increasingly deploying funds, including in areas such as derivatives and decentralized finance (DeFi). 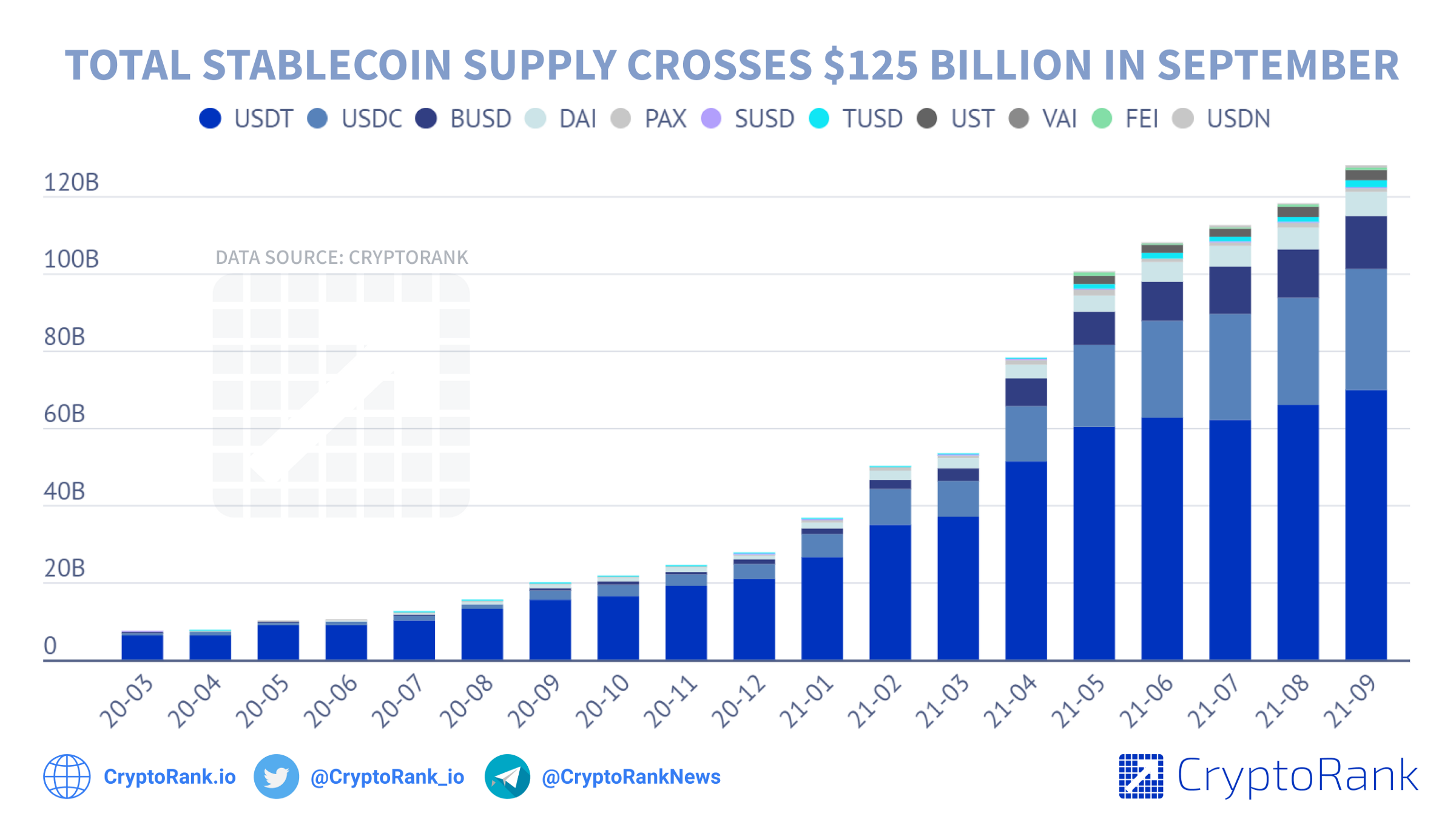 Q3 marked an important milestone in Ethereum’s evolution with the London Hard-Fork and numerous proposed updates. Among them, EIP-1559 is the most notable update. It included a proposal to improve transaction savings based on the network density, and another proposal to burn a portion of Ethereum’s transaction fees to mitigate the impact of inflation on ETH price. This tTransaction fee-burning mechanism has resulted in $1.1B of ETH being removed from the network’s circulation since it came into effect. According to Ultrasound.money data, OpenSea leads, followed by Uniswap V2, Tether, and Axie Infinity. 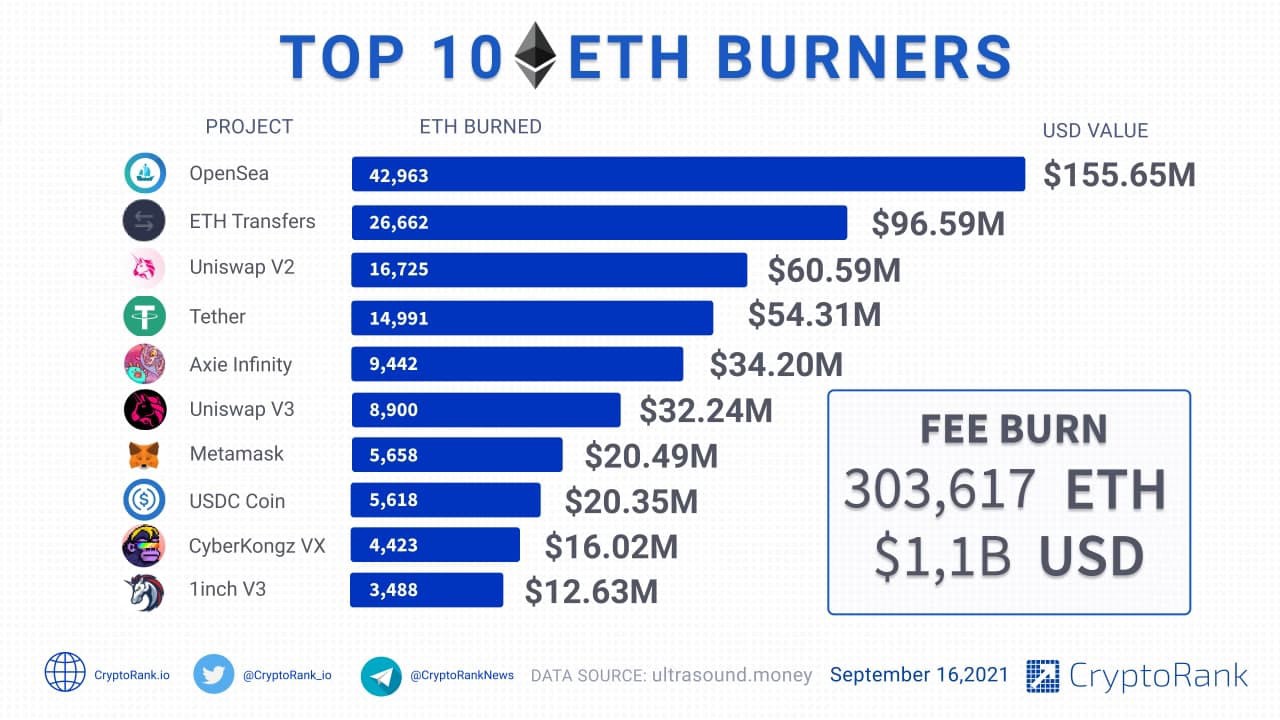 In the 3rd quarter, the total trading volume of derivatives volume and adjusted spot volume of the top-10 exchanges – showed a decrease of ≈37%, in comparison, Q2: decreased from $22,6T to → $14,2T. 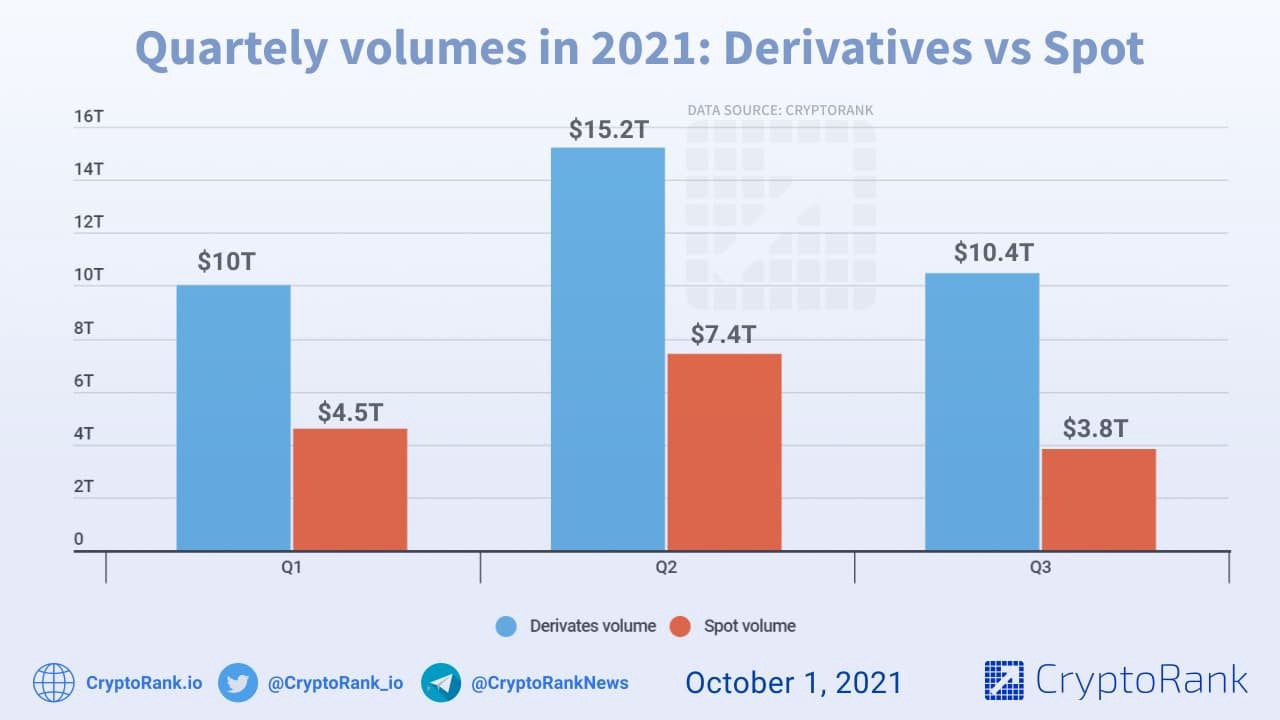 DEX volumes also decreased by 34% in the third quarter after experiencing considerable parabolic growth over the past year. 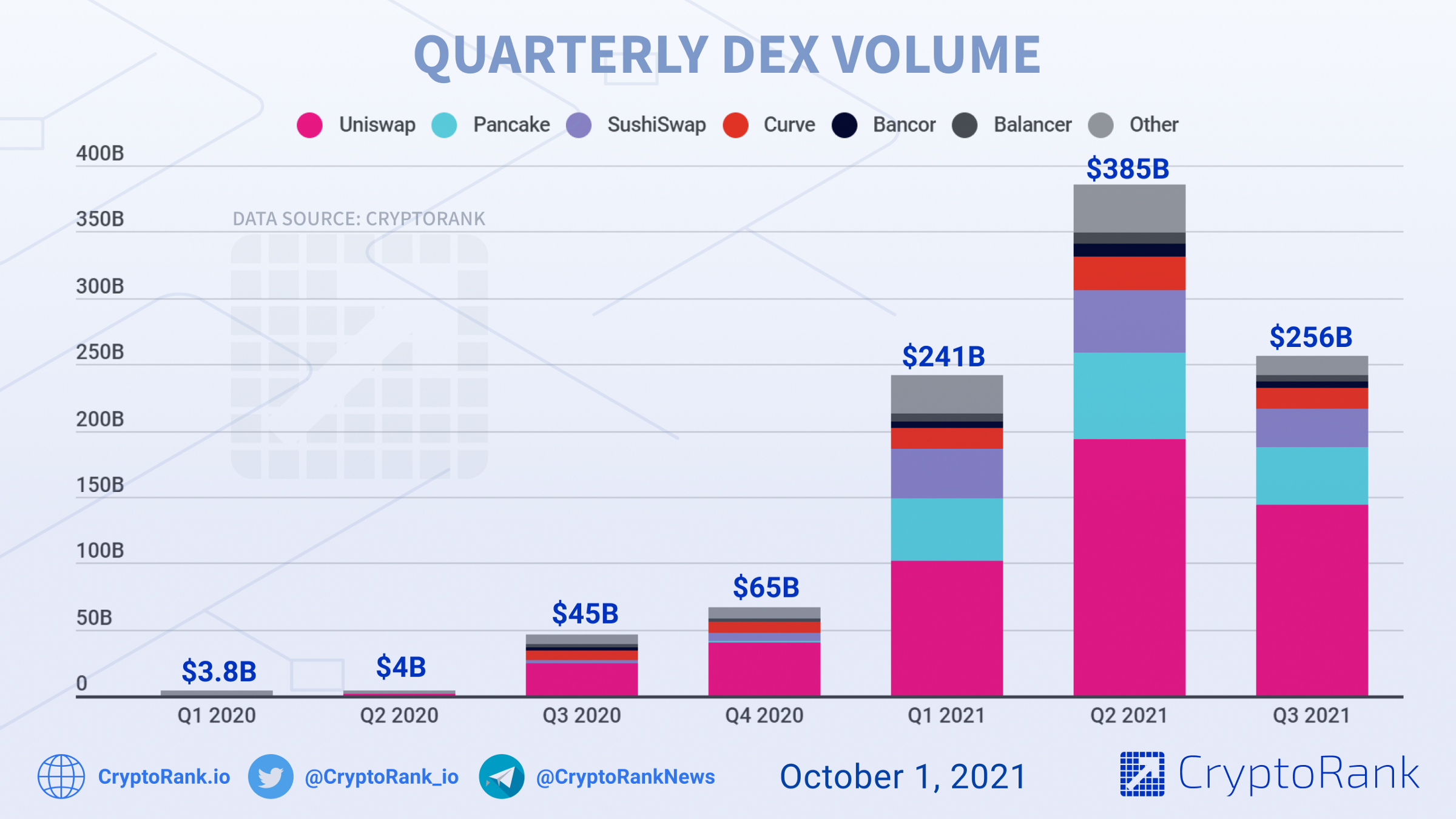 The explosive growth of the DeFi sector, together with the market uptrend, triggered a significant increase in Ethereum futures, which led to an open interest record of over $9.1B.

As a result, the daily volume of Ethereum futures reached the highest values ​​of the previous quarter.

The decentralized exchange dYdX has been securing its share of the derivatives market. Over the past few days, trading volume on the platform reached ~$9 billion, and open interest approached $500 million.

The project’s native token of the same name has renewed its ATH at $27.66 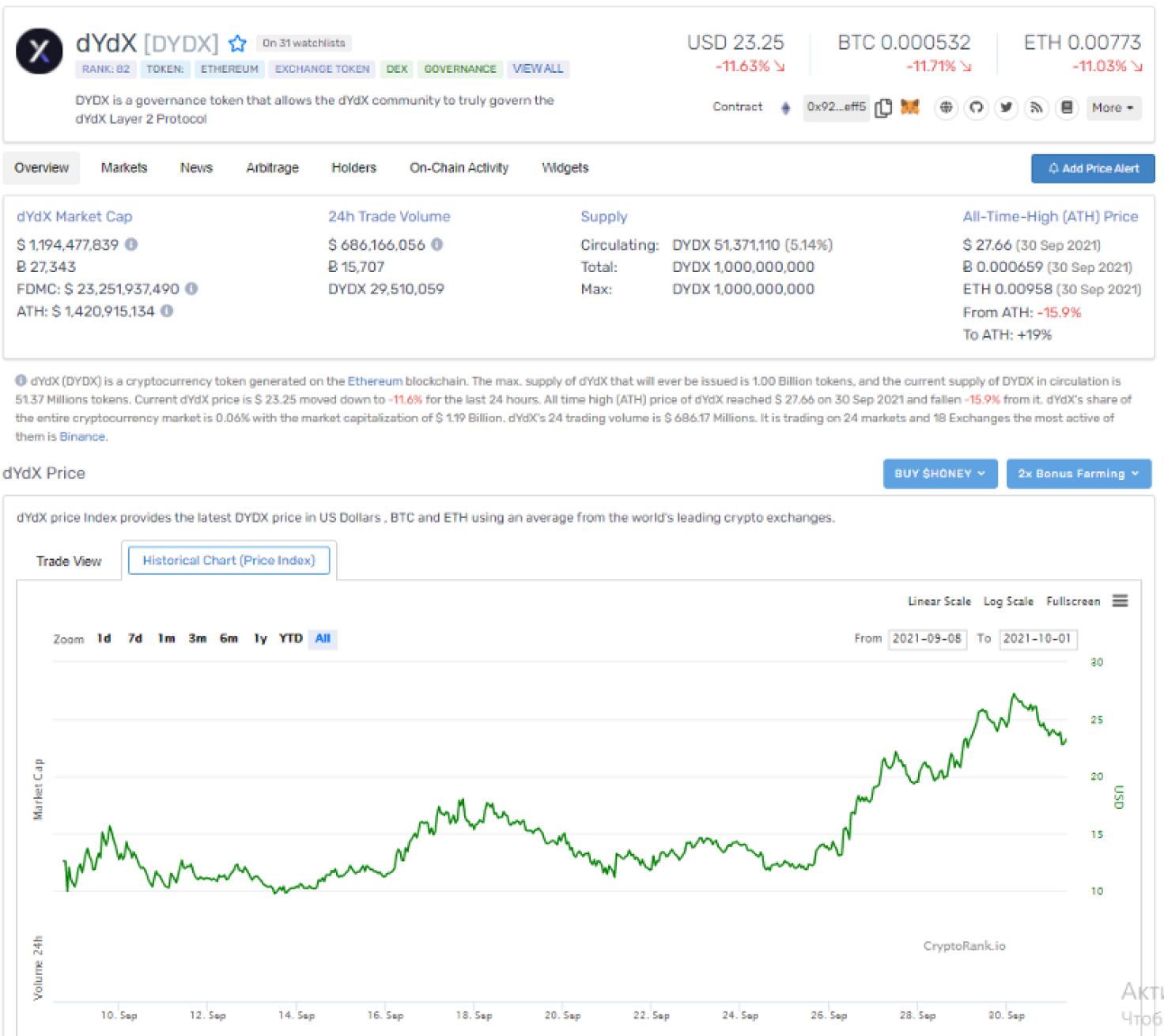 As a result of incentive programs, the total value locked also changed significantly in DeFi, money continuously poured into new ecosystems during Q3,2021. 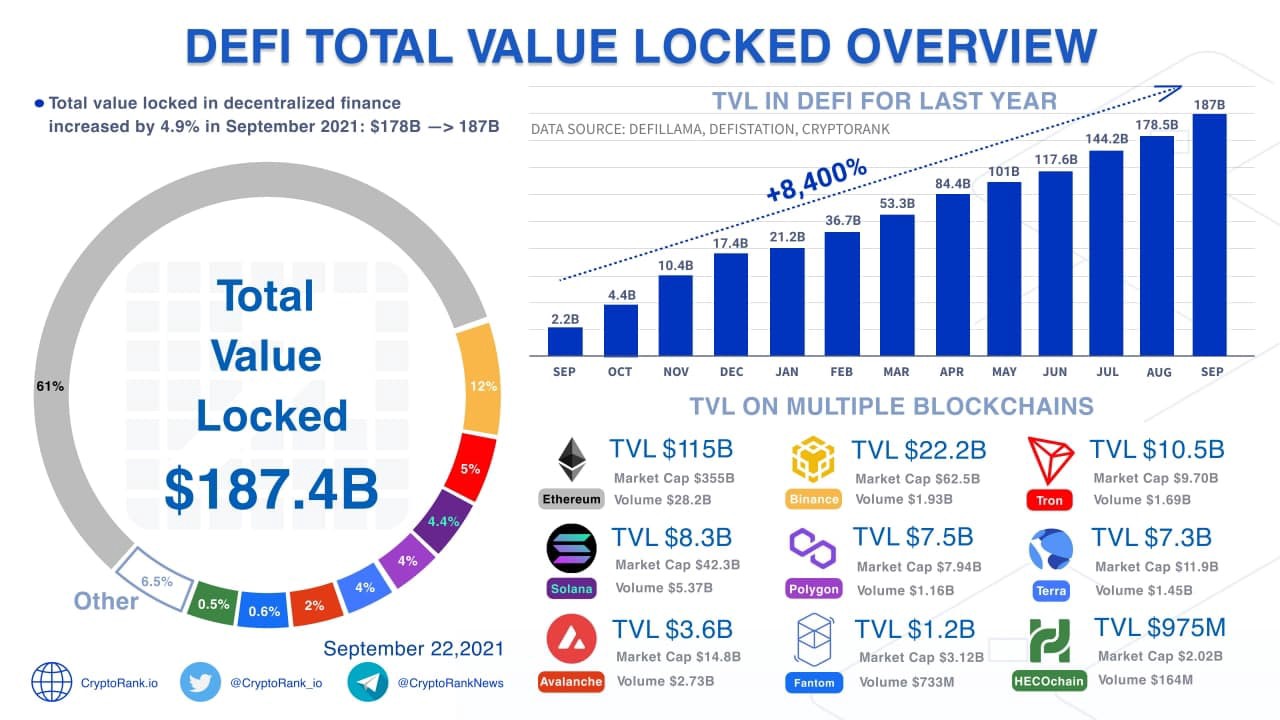 Thanks to several recent DeFi fund and initiative program launches, the combined total value locked in all DeFi protocols has passed $180B 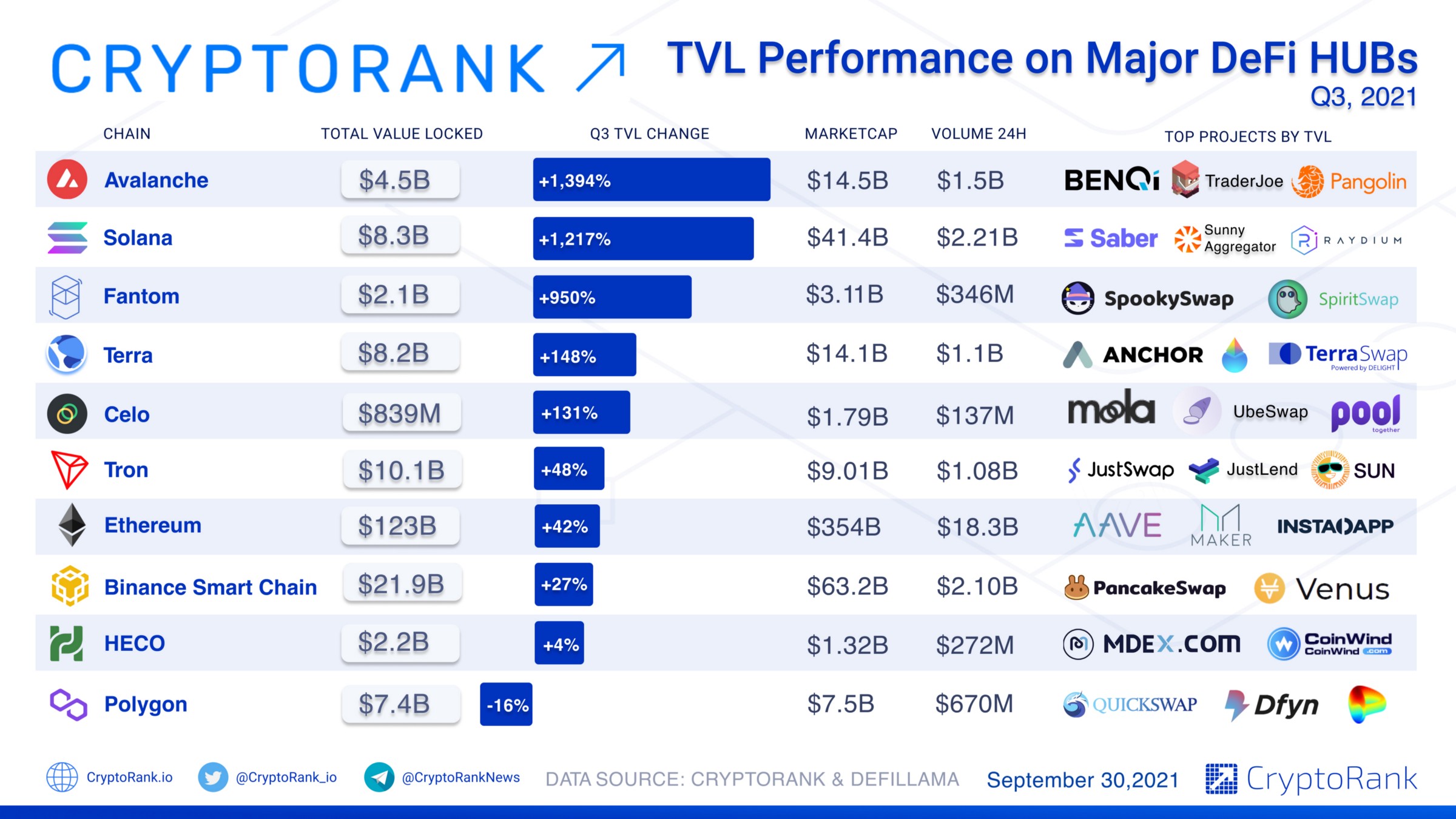 Worth noting among these new ecosystems are Avalanche, Solana, and Fantom, with steady growth in both market capitalization as well as TVL.

Thanks to market conditions, most top-tier fundraising platforms are showing average positive results for their current ROI of IDOs conducted on them. 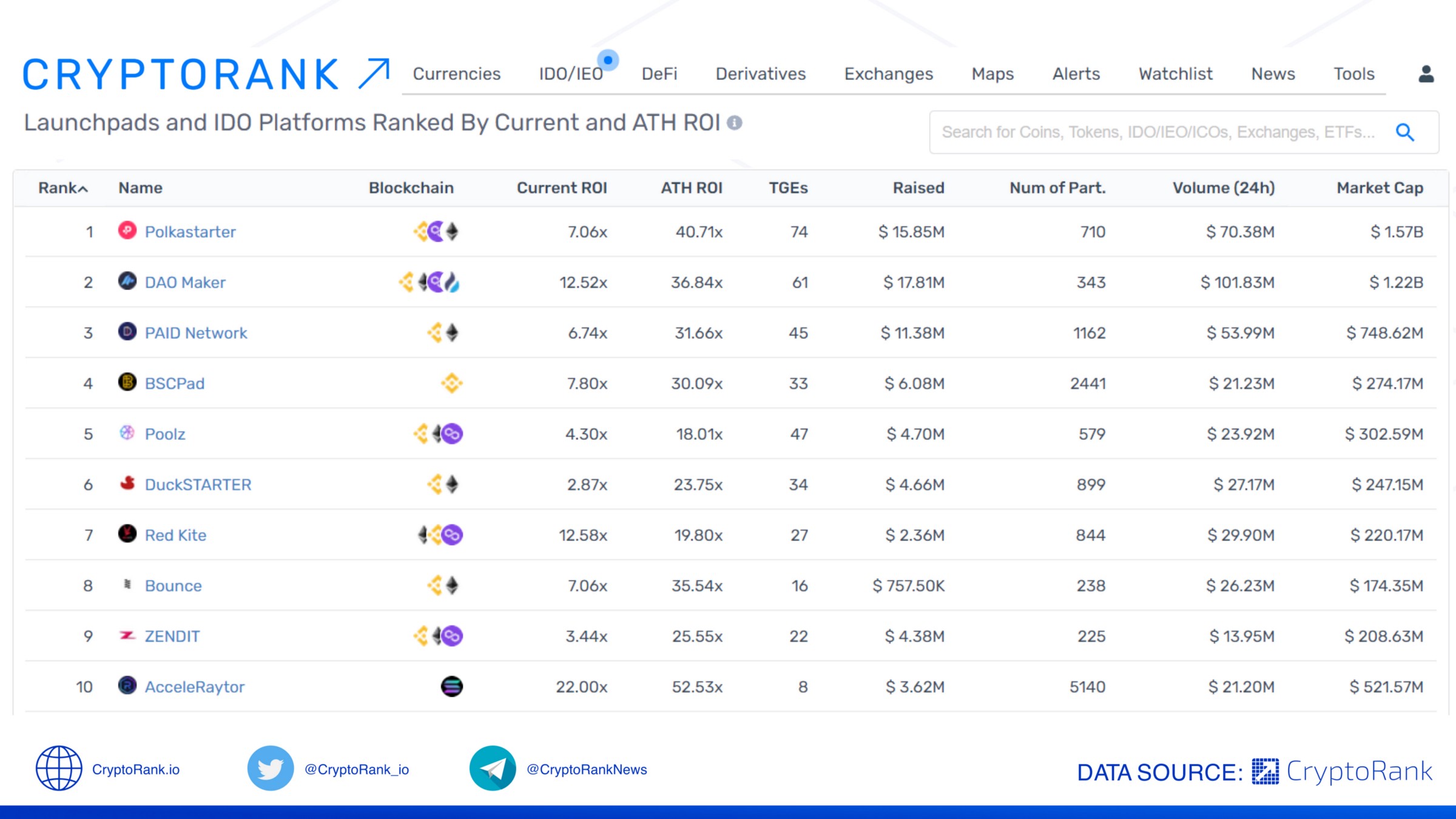 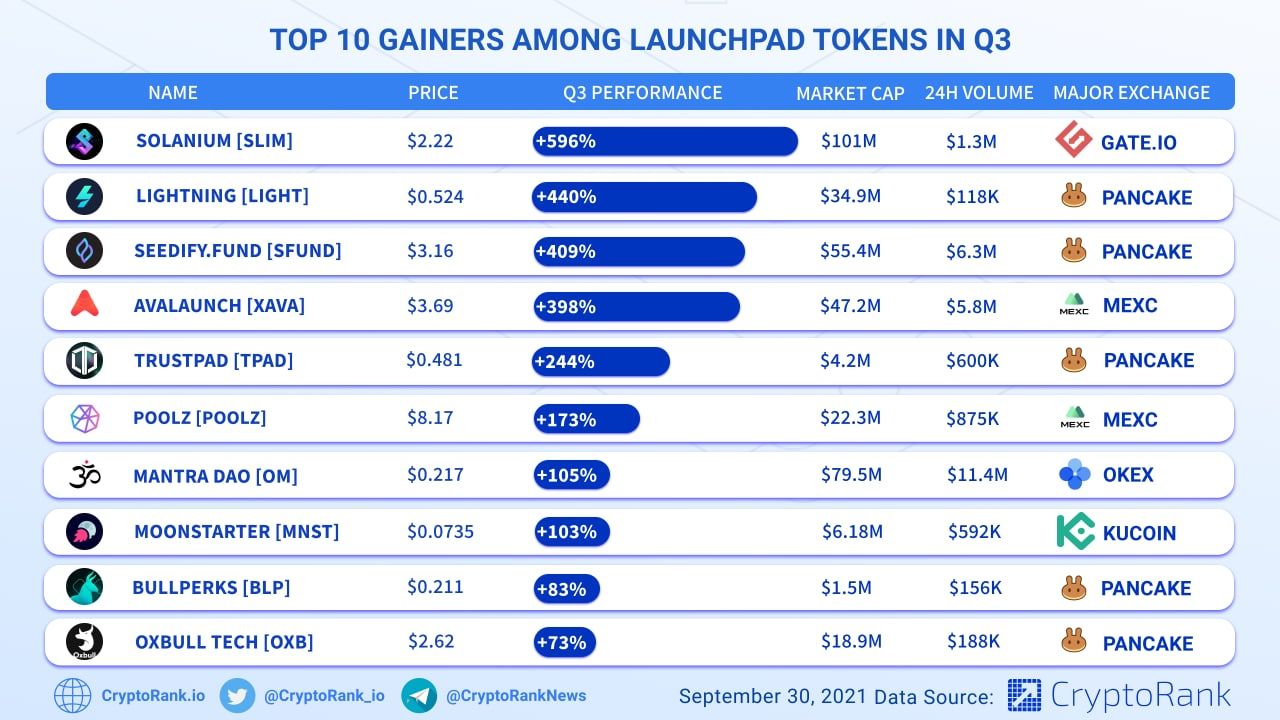 Despite having roots that trace back to the very beginning of cryptocurrency, GameFi is only just starting to attract mainstream attention. The success of one of its flagship titles, Avie Infinity, accurately reflects the growth of this niche. 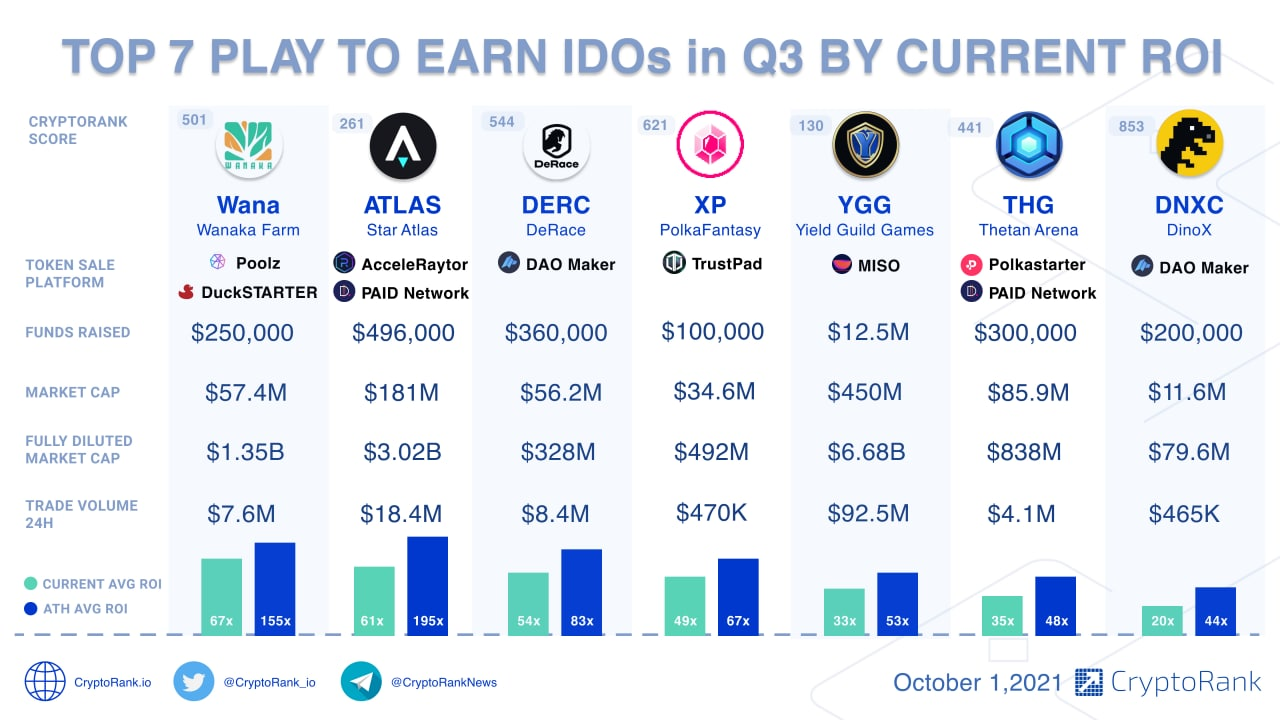