Fundamental and technical analysis of the HT Token. How much can you actually earn by holding a Huobi Exchange Token? 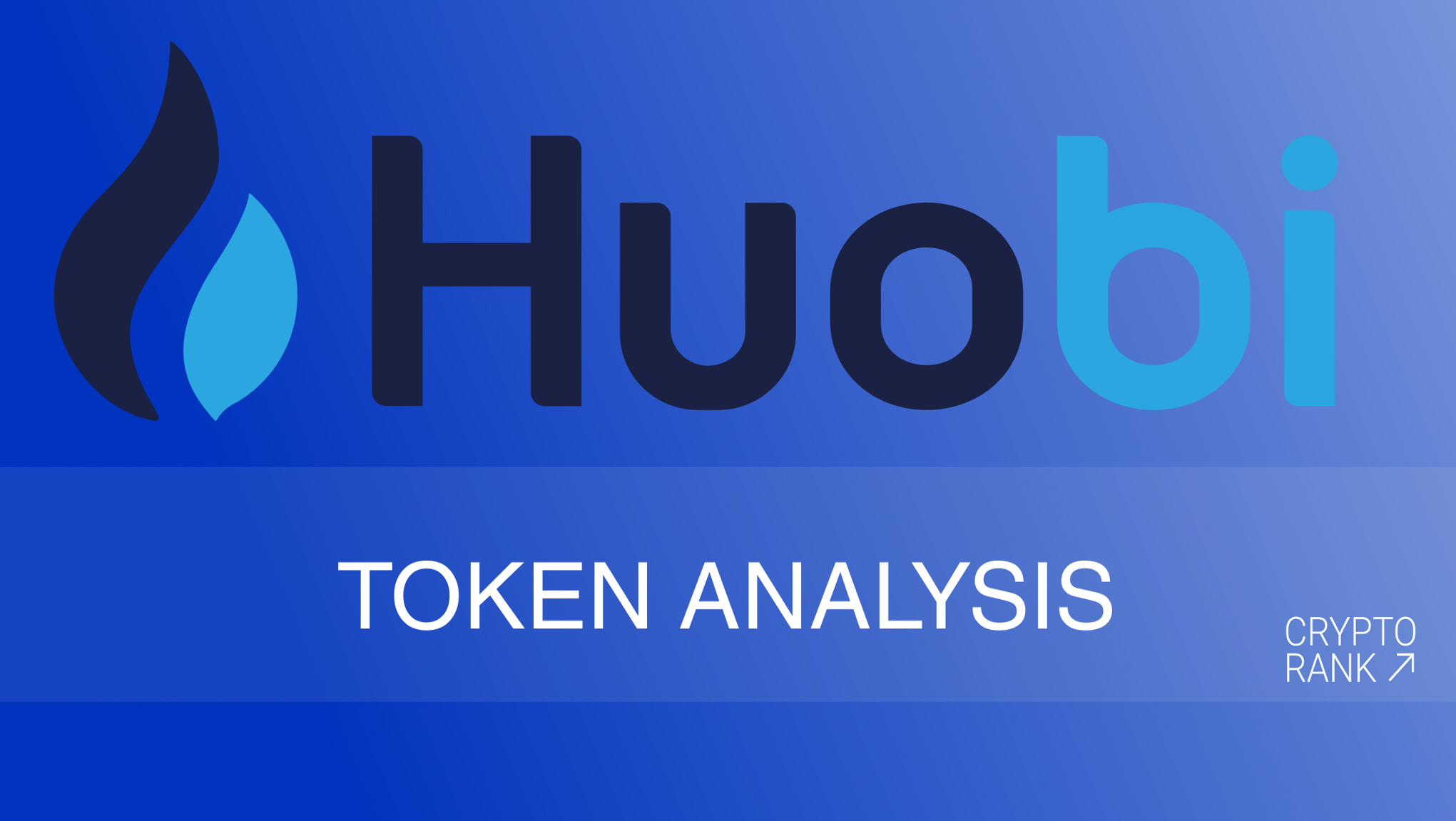 The Huobi Cryptocurrency Exchange was founded in 2013 in Singapore. Now it actively develops, enters in top-10 the largest platforms on trade turnover and sets different trends in the field of crypto.

The HT capitalization is $1 001 071 030 at the moment, and the circulation is 245 696 126 HT. This token is quite popular, so if you are interested not only in the current Bitcoin price, we advise you to get acquainted with this cryptocurrency.

The pricing of exchange tokens is strongly influenced by such internal factors as token burning, IEO profitability, obtaining various advantages of tokens holding, discounts on the trade commission, the opportunity to participate in various promotion programs of the exchange and others.

Using the HT Token in the Huobi Global Ecosystem

The involvement of HT tokens in the Huobi Exchange ecosystem is very high, and the options for their use are very resourceful.

The Exchange is constantly working on expanding the ways to use its tokens. There are some of them:

FomoHunt became the first E-Commerce use case for the Huobi Token at the end of August, and now it can be used as currency in an online store.

These tokens cannot be abruptly put up for sale in the secondary market, providing fundamental support for the price. At the same time, this structure can quite significantly transform during the quarter.

Unlike many other exchanges, Huobi provides token holders with the right to vote, so they can influence decisions. A public vote was held on the number of tokens to be burned recently. The holders decided that HT will be burned at a rate of 15% of the profits starting from the fourth quarter, and 5% will be used to buyback and burn the team’s tokens to prevent them from entering the secondary market.

And if we compare the ICO with the Total Circulation Supply, which is 245 880 576 now, we note a 9% decrease. This calculation example is not a completely correct, but clear. 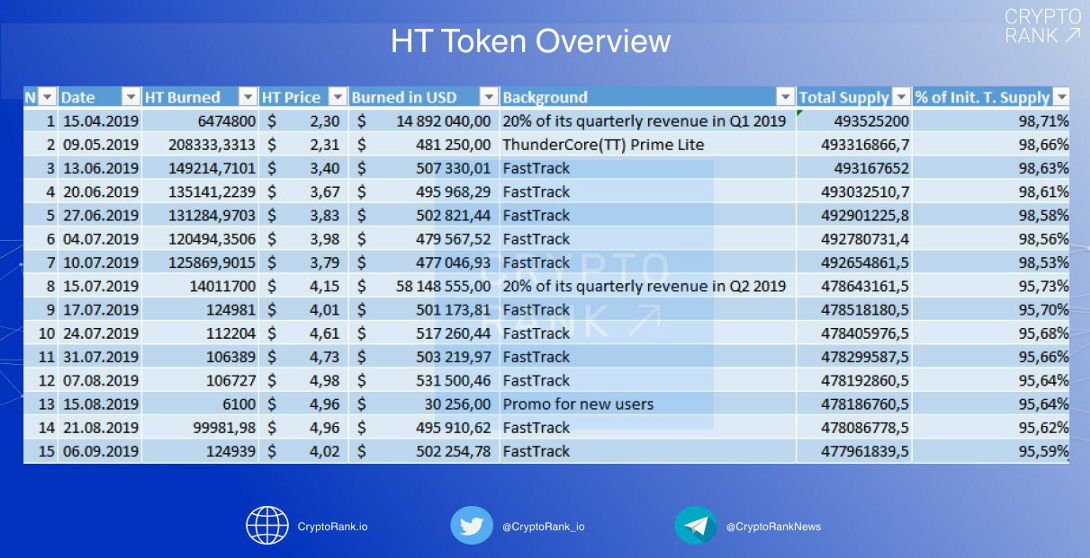 Huobi conducted seven IEOs and ranks sixth on current ROI (+ 79.23%) and third on ATH ROI (+ 563.78%). Huobi Prime is usually organized a little more often than once a month. Usually, trading opens fairly well at a price of 5x the second round price of Huobi Prime and then begins to decline.

It is not correct to evaluate ROI relative to the IEO price to determine your funds investing efficiency. It’s much more important to understand how much you can actually earn.

You need to keep at least 1000 HT for a month for admission to Huobi Prime. This amount also allows you to get one lottery ticket.

20% of the Huobi Prime funds are raised by a lottery.

80% of the funds are raised by the oversubscription model.

Let’s calculate how much you could earn by participating in the last two Huobi IEO.

It was necessary to hold tokens in the amount of at least $4 000, and in which connection

You would receive tokens in the amount of $40,35 by the oversubscription model.

2️⃣ The Whole Network has concluded IEO (09/11/2019), and the lottery results are still unknown. The token purchase price a month before it was $5.

It was necessary to hold tokens in the amount of at least $5 000.

You would receive tokens in the amount of $28,07 by the oversubscription.

And the investment return would be $112,26 (+ 2,05% of the initial holding amount) if tokens were profitably sold at a price of 5x of the second round price 📈

It is also worth considering that the tokens hold only for the sake of one IEO would be unprofitable and the loss on the exchange rate would be $1 000 since it fell from $5 to $4 in one month.

The Huobi FastTrack campaign is organized on the Huobi exchange about twice a month. The users vote with their HT tokens for one of two proposed projects for listing. In case of winning, they receive tokens of this project with a 50% discount in proportion to the ratio of the total allocation amount of this token in HT and the number of HTs that take part in the vote. As a rule, this amount is equal to $250 000, and the rate in HT is become to be known along with the FastTrack announcement.

It is likely that with an HT rate decrease, the benefits of participating in Huobi Prime and Huobi FastTrack increase. This is possible due to the growth of individual allocation because you need to spend more HT on voting to close the entire project cap. 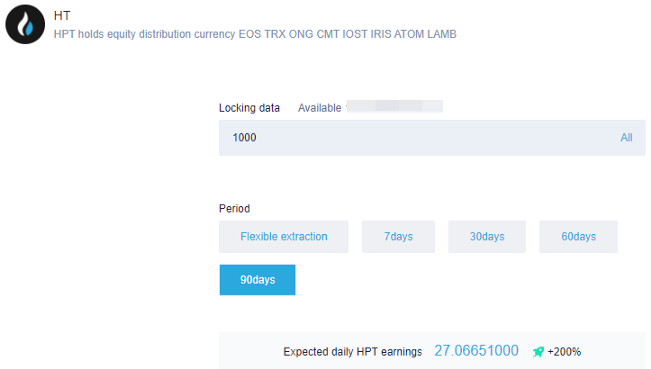 HT holders can lock their tokens in the Huobi Pool and receive airdrops of the second exchange token — HPT. For example, you own 1 000 HT ($4 000) and lock in funds for 90 days. The airdrop will be $87 (2% per annum) at the current HPT rate. HPT holders also receive an airdrop of other tokens for staking. You can learn more about it in the rules.

Locked tokens are involved in calculating the holding in Prime FastTrack and Huobi Prime, but cannot be used for voting or placing an order.

The Mirai Team prepared the HT technical analysis for pairs of USDT and BTC.

There is some uncertainty at the moment because the price fluctuates between the trend (black dotted line) and the blue resistance zones. The best tactic is to wait until the blue level breaks through and the price fixes above it, and only after that buy HT with a stop under the trend line.

Alternative tactics: if the trend line does not stand, then the price can easily go to the blue zones (the following support levels + Fibonacci retracement levels). In this case, it is already possible to buy back the token in parts with a main position in $3,1- $3,3.

It is advisable to tighten the stops under the red dots marked on the chart for those who are already in position.

Now the price is close to the support of the rising channel and the Fibonacci retracement level (61,8%). The optimistic version of actions is testing the mirror level, breaking through it and working out the double bottom to the green zones on the chart. Then it is possible to buy from current positions or after the blue area. And finally — a stop under one of the red dots, depending on your PM.

A pessimistic option is breaking through channel support and lowering prices to the blue zones. In this case, you need to watch how it will be bought back.

The second quarter turned out to be very saturated and volumes on cryptocurrency exchanges were high, but they have been declining recently. It also affected the Huobi Exchange. Now it is impossible to accurately assess how much the volume on the exchange will decrease in the future, but it is very likely that Huobi’s profit will fall in the third quarter and tokens will be burned much less than in the second quarter. This may adversely affect the HT course.

Pros of falling HT rate for a potential investor:

Pros and cons of the HT token:

➕ Thoughtful tokenomics. The deflationary model acts and gives a result. HT tokens are burned very quickly, and the number of tokens involved in the exchange ecosystem is growing.

It is noteworthy that according to the Q2 2019 results, Binance burned tokens for only $26M, while Huobi — for $88M. The picture looks even more representative with respect to current capitalization and circulation. HT token looks very attractive in the long run.

➕ The team and CEO Livio Weng openness. Public token burning and transparent voting procedures can be afforded by few exchanges, and Huobi is one of them.

➖ The price of HT looks a little expensive in the short term, despite the advantages that can be distinguished by comparing Huobi and competing exchanges. Moreover, the current situation carries some risks in terms of technical analysis.

However, you can expect sudden decisions, changes in the conditions for the presented products and the announcement of new ones.

➖ Claims for the authenticity of the trading volume declared by Huobi (according to the Bitwise report for the SEC, Huobi is not among the exchanges with a reliable volume). However, Huobi refutes this information.

You can find a lot of useful information on the exchange tokens topic at CryptoRank:

Share the article to support the release of further material. You can also follow us and Mirai Team on Telegram.